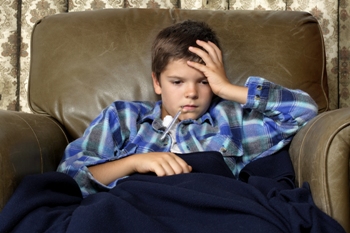 This week, Faith and I have been through another parenting milestone: chicken pox.

Last Thursday, Faith noticed a few red bumps on our oldest son’s neck. He seemed a bit tired, so she took him to the doctor just to get him looked over. Chicken pox, they said. They armed her with piriton and calamine lotion and told her to batten down the hatches.

He was covered from head to toe in red blisters. He was tired and itchy and he spent the entire day on the couch, (thank God for Netflix). Faith slept on the floor with him that night, and the night after, and woke up every hour to rub lotion all over his itchy little body.

We’re on day six now, and it seems the worst is behind us. The spots have crusted over, which we’re told is a good sign, although it doesn’t look pleasant. And Adlai seems a bit more like himself, which is a blessed relief. The doctor told us the spots will be around for up to two weeks, but as long as Adlai’s feeling a bit happier, we feel okay about that.

The bad news is he also told us we can expect Koa to get it in the next few days. The good news is that once this is over, we can kiss chicken pox goodbye forever.