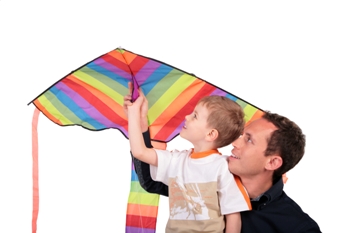 I didn’t expect to have a lesson in fear this bank holiday weekend. To be honest, as we walked toward the Kite Festival in our local park I was well and truly in my comfort zone.

Fortunately this Kite Festival is about much more than animal-shaped kites (though they do feature heavily). This Kite Festival is accompanied by a number of over-priced fair rides, many of which are incredibly appealing to my 3-year-old son. So, we told Adlai to weigh up his options and pick a ride. He chose a loosely Toy Story themed bouncy castle slide of epic proportions. This thing was big. We briefly tried to talk him out of it but he was already taking his shoes off. He had chosen.

He began the bouncy ascent. All we could do was watch as he was passed by a stream of big kids. He pushed on, unfazed. Once at the top my son stared expressionless down the slide. Slowly he sat down as close to the side as possible. Big kids still whizzing by, now on their 4th time round. He paused for what seemed like an eternity and at one point, I could see him pondering turning back but eventually he shuffled beyond the point of no return and began to plummet down the canvas. His face turned to sheer terror as his speed increased. Eventually he arrived at the bottom of the slide where his look of terror turned to one of joy mixed with a healthy dose of pride.

Faith, Koa and I shouted encouragement from the sidelines as Adlai collected his thoughts, still sat at the bottom of the slide. Eventually he looked over at us, stood up and said ‘Can I do that again?’

He went on that slide 4 or 5 more times until his time was up. Attacking the next attempts with increasing confidence in his own ability.

I learned something from my son this weekend: It’s been a while since I’ve been terrified of a slide. But, I’m often terrified, worried or full of fear. Confrontation happens, challenges arise. I often want to turn back. But, if I shuffle past the point of no return and embrace the fear I will always reach the bottom and, if I’m lucky, I’ll know myself a little better when I do.