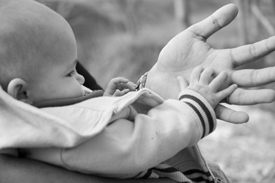 I realised this week that I’ve written a lot about Adlai and not much about Koa, my newest son.  It isn’t favouritism so much as the fact that Adlai just does quite a lot more than Koa does.  At six weeks old, Koa’s main talents are pooing and weeing and crying, which is understandable, but not quite as entertaining as his brother’s shenanigans.  Faith told me I should talk a bit about Koa this week, though, so that’s what I’m going to do.

It has been interesting getting to know the little fellow, and seeing how he’s different and similar to his older brother.  Honestly, there is a lot I don’t remember about Adlai being this age.  When you’re in the middle of it, you are so obsessed with their sleeping and pooping and every tiny thing they do, you think you’ll never forget any of it.  But you’re wrong.  Now, people ask us if Koa cries more or sleeps better than Adlai did, and we shake our heads and say we don’t know.  Because we really don’t.

Six weeks is a bit of a turning point, or so Faith tells me.  I can see it a bit.  When my youngest son looks at me now, I feel like he really sees me, which makes for a change.  It makes holding him and changing him a bit more enjoyable, because I’m sure I see a bit of gratitude in his eyes or, at the very least, recognition.  He is waking up to feed an average of two times every night, which Faith doesn’t seem too bothered by.  She kindly lets me sleep through most feeds, and only pokes me awake when he has done an especially big poo that she wants me to change.  I’m normally pretty happy to oblige, considering she’s doing the lion’s share of the night shift.

Adlai is in love with Koa as ever.  His first question every morning is “Where’s the baby?