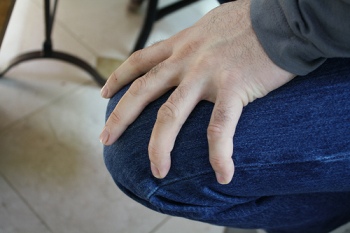 You probably don’t know this… I mean why would you?… but for the past few months I’ve been suffering with patella tendonitis (ouchy knees). It’s incredibly annoying and apparently the result of years of sporty abuse. Being the man I am, publicly I’ve barely mentioned the pain but, on a bad day, behind closed doors I talk about little else.

My moaning has not escaped the attention of my eldest who has started sporadically walking round with his hands on his knees telling anyone who will listen that he’s in pain. Don’t know where he got that one from. The thought that he picked that up from me is pretty frightening. I’m happy for him to learn the stuff that I teach him but the stuff he picks up just from watching me… crikey. It’s definitely caused me to think twice before doing pretty much anything. Peeing had been uncomfortable for a while and not because of any prostate related issues. It’s the interested eyes of a certain 2 year old. The bathroom just feels a little crowded.

On a more serious note it’s made me think about the conversions Faith and I have around him. I want him to know that I love his Momma. I want him to know how to treat his wife when he grows up. So it’s game time. It’s not just my relationship on the line. It’s generational treatment of wives and general happiness. It turns out there is a lot on the line around the dinner table.

Some rights reserved by *bri*