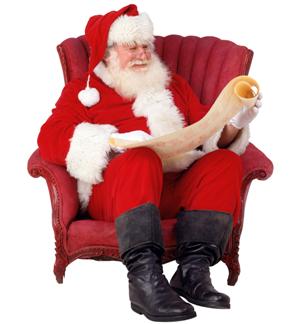 Christmas and the true Santa come but once a year… but his ‘helpers’… well, they’re working overtime. You know his ‘helpers’… they’re the guys in the cheap red suits sitting in grottos of varying convincingness all over the world, putting kids on their knees and taking requests for the main guy who presumably needs to stay focused on the big night.

Adlai, having just turned 3 is starting to grasp the concept of consumerist Christmas, and with it the idea of ‘Santa Claus’ (With the American-ness of my family I’ve decided not to push the name ‘Father Christmas’ – it didn’t seem like a die in the ditch issue). (Un)fortunately a visit to a grotto has been deemed a little too scary by my toddler and he prefers to view Mr.Claus from a safe distance.

Last night one of Santa’s helpers was being pulled along by a pickup truck riding on a trailer through the streets of my hometown (classy). This Santa was collecting money for various good causes (more classy) none of which mattered to my son who decided we should go on a Santa hunt. Fortunately this Santa was blasting out popular Christmas hits from his pickup truck so all we had to was follow the sound of Cliff Richard.  When we found him we got as close as we dare (Close enough to really realise that this guy was definitely a ‘helper’) and waved. We followed the err…. ‘sleigh’ back to our house, put some money in the jar and waved some more.

Quite helpfully at this point Santa told Adlai it was time to ‘go to bed and get some rest’. Now bedtimes have been a bit of a wrestling match but not this time. Not when Santa had specifically asked Adlai to go to bed. So what we need now is for Santa’s Cliff Richard loving helper to swing by every night of the year.