Survival of the Fittest. 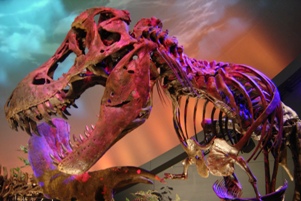 We left more than fast food and family when we left America. We also left our closest friends. In America, we lived with them, went on holidays together, exercised together, bought the same clothes… I don’t mind admitting we are weirdly tight.

This week though, our friends made the 3500-mile journey and for eight days we were reunited.

They, like us, have multiplied and have two kids meaning that our two-bedroom house was well beyond capacity. We had four adults, a three-year-old, a two-year-old, a one-year-old and a four-month-old. It was loud. And to add to the general liveliness of the situation, 50% of the house were struggling with jet lag.

I could tell you about all the awesome things we did, but instead I would like to tell you about the worst. We decided to go to the Natural History Museum in London. Unfortunately for us so did the world, his wife and worst of all, his kids. I mean they were everywhere. Literally everywhere.

It was the dinosaur exhibit that broke me. After being in a queue for 30 minutes we were packed in and herded round. The two older boys had a great time. The two younger did not. I can still hear the screaming. The sardine quality of our situation meant there was no escape and we were forced to brace ourselves and pray that we all made it through the T-Rexes and Iguanadons alive. If those dinosaurs had made it through the Ice Age, there’s a possibility the stress of this situation would’ve done them in.

Such was the trauma of that fateful day that I’m never going to be able to watch Jurassic park again. But where our resolve was broken our friendships survived and as we waved goodbye at Heathrow on Sunday, we marvelled at how strong our friendships really must be to survive eight people in a tiny Victorian terrace house, four poo explosions, two screaming babies, approximately seven toddler tantrums, and the museum trip from hell.  I can’t wait until our next visit – heaven only knows how many more humans we will have accumulated by then.