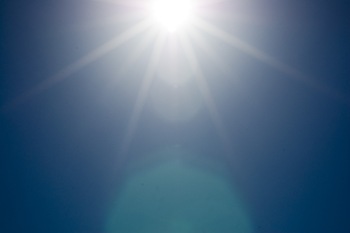 The week has come where we moan about the heat rather than the rain. I don’t know if you’ve noticed, but it is stinking hot out there. It’s official: summer is here.

Being married to a North Carolina native, where summers are properly hot (100°+ every year) I’ve become very accustomed to hearing negative (and usually justified) comments towards the British summer. This week though, is a week where Britain has come through sporting summer weather prowess.

At the first hint of sun, we put up our paddling pool. We bought it in the sale in November in a moment of great foresight, so I was feeling particularly smug about the whole thing until I realised that we don’t have a hose or an outside tap. I worked up a real sweat and had a good lesson in humility carrying what felt like hundreds of buckets from the kitchen to the garden.

The effort was worth it. The whole family stripped off to varying levels and ‘dived’ in… or as much as you can dive in two inches of water.

We’ve also introduced homemade popsicles in a variety of favours…well, two. So until this heat wave passes, if you need me I’ll be ankle-deep in a toddler pool, sucking on a popsicle of either the lemonade or grape juice variety.