What Have You Been Up To Over The Past Three Years? 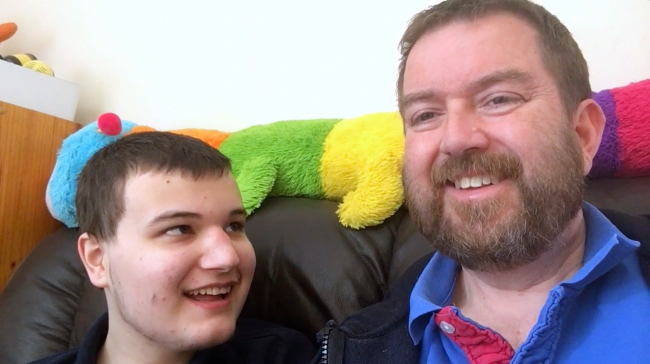 That might seem an odd question to ask in the middle of a global pandemic when for many of us we can’t think what we’ve been doing over the past three days, let alone years, but there is method in my madness so please bear with me…

You see, three years ago I was heavily involved in the work of Dad.info, focussed on additional needs content for the site. For any ‘The Simpsons’ fans out there, think of me as Troy McClure, “You might remember me from such films as…” ‘Holidays’, ‘Back to School’, ‘Halloween’ and ‘Surviving the Christmas chaos’. As well as the videos, I wrote some stuff too, offering an insight into our world, the world of additional needs parents.

At the time, my boy James was 15 and finding things really tough.

Diagnosed as Autistic and with Learning Difficulties aged 2½, at 15 he had added Epilepsy and Anxiety Disorder to his collection, resulting in him refusing to leave home and go anywhere. ‘Anywhere’ included his previously favourite places like the farm shop he loved or the café where he got chocolate cake and something to drink; it also included school, which he was out of for 14 months.

That period was really tough; tough for James as he tried to deal with the anxiety that overwhelmed him and the seizures that terrified him. Tough for us as we saw our lovely boy struggling so badly, being harmed physically, mentally and emotionally by what was happening to him.

In the middle of the storm

We cried, we ranted, we asked countless questions. We showed the same unconditional love to James that we always had, being there with him in the middle of the storm. Bit by bit we found answers; bit by bit the support James needed was mobilised and provided; little by little we could see James making progress, although painfully small as it was.

To start with, all he could manage was to take a couple of steps out of the back door, collect something he liked from a table there and then rush back into the safety of his den. We moved the table further away, and he took more steps to get there. We moved it down the garden and he reached it and back again. Then one day, a couple of summers ago, something extraordinary, surprising and wonderful happened…

A trip to the tip

I had been hard at work in the garden and had filled the car with stuff to take to the tip. James had always enjoyed coming to the tip, but, like everywhere else, hadn’t been there for over a year. We had always offered for him to come out with us, but he had never been able to until that day. I told James that I was going to the tip, I showed him a photo of it, and asked if he wanted to come. Without hesitation James got up and headed down the hall towards the front door, me in shock following behind. He had bare feet; we didn’t stop for shoes but went straight out to the car where disaster almost struck! You see, James sits in the passenger seat behind the driver’s seat, and it was folded down and full of stuff for the tip! I quickly manoeuvred James round to the front passenger seat and he was IN THE CAR! For the first time IN A YEAR! (If there was an even more expressive option than capitals, I’d be using it here!!)

I’m not sure how we safely made it to the tip and back, I had tears in my eyes the whole time, but we had a successful trip out for the first time in a year and got back in one piece. It was a massive turning point, one that led to James starting to reconnect with some of his other favourite places again, and that September he started to visit school once more. Just an hour here and there to start with, but it was a start that he, and we, could build on. These days he’s at school three days a week; we still have days when he can’t manage it, but most days, like today, he does.

The anxiety is still there, but James has learned to adapt to it, to be more resilient, and so have we. James’ epilepsy is under control, but we still need to be vigilant, we still need to be there for James 24/7. Our world is very different to the one we knew three years ago, and not just because of COVID-19, but we are emerging into the sunlight again. It still rains, but we’ve learned to dance in the storm!

I’ve been invited to re-join the Dad.info ‘family’ again and am thrilled at the prospect of writing and maybe video blogging from the perspective of a Dad of a young person with additional needs. I hope that some of what I’ll be sharing will be helpful to you, that it might resonate with you, that it might give you a voice too.

Outside of Dad.info, you can connect with me through the work I do at Urban Saints, or maybe you would like to check out ‘The Dads Fire Circle’, a place for Dads of children with additional needs to meet, learn from and share with each other. There’s a Facebook group too that you can find by just searching for The Dads Fire Circle.

If there is anything that you would like me to write or video about, something that you think would be helpful to other Dads of kids with additional needs, then why not drop me a line at marnold@urbansaints.org, it will be great to hear from you! (Cue ‘The Simpsons’ theme tune… “Daa…dada da-da…dada…”) Mark

Coming Out When You’re A Parent

'Coming out' as homosexual to your wife and kids isn't easy but, says Director of A City Law Firm, Andrew Spearman, it's time to stop holding your breath and start living life as the real you. It is already a big decision, but does having kids make that leap...