If you’re fed up with jokey socks and cartoon ties, let your children know what you really want this Father’s Day – a favourite toy from when you were a nipper, or simply a game that spells out loud and clear what a cool dad you are. There’s no room for subtlety, so print out this wish list and stick it under their noses (along with some extra pocket money), and you and the kids will have a blast come 21st June…

If you were jammy enough to own the Flying Scotsman train set when you were a kid, you’re sure to remember the pure unadulterated joy of driving the most famous train in the world. If, like the rest of us, you could only drool at it through shop windows, now’s your chance to finally have your very own dream machine with this Hornby Flying Scotsman set. Inside the box, you’ll find the infamous apple-green liveried class A1 Flying Scotsman, ready and waiting for you and your little helpers to while away hours as you recreate those wonderful days of train travel in the 1930s. That was the era when trains weren’t just machines to get you from A to B (or with the Scotsman, from London to Scotland), but were locomotives of beauty, grace and the things little (and not so little) boys’ dreams are made of.
Hornby Flying Scotsman set (ages 3+): £159.99. Hornby.com

WIN!
For your chance to win this Hornby Flying Scotsman set, plus an incredible Hornby Father’s Day weekend package for four, including a Scottish steam train experience, click here

If you were mad about model making as a kid, or you had a walking, flashing robot who doubled up as your best pal, you may have forgotten those annoying niggles – such as gluing aeroplane parts to your ear with glue, and your machine mate needing 20 batteries for 10 measly minutes of robot action. Fortunately, the T4 Transforming Solar Robots doesn’t require glue or screws for assembly – instead you build the kit with easy to connect pieces. Neither does it eat batteries for breakfast – all it needs is that big ball of burning gases in the sky to build up some power. The sun-loving fella comes with active movements and a safe mechanical gearbox, and features walking legs and moving wheels, the T-Rex and Rhino beetle have walking legs and opening jaws while the Drill vehicle has a turning drill with moving wheels. Awesome or what? Just remember to let you kids get in on this eco-friendly fun, too.
T4 Transforming Solar Robots (ages 3+ but with help from Dad): £14.95. red5.co.uk

There’s a good reason why LEGO’s topped the boys’ number-one must-have toy for decades – those colourful plastic blocks unleash limitless possibilities – from a humble tower to the cosmic landscape found in the LEGO® CITY Space collection… Put the pocket-money friendly LEGO® CITY Space Starter Set on your Dad’s Day wish list, and come 21st June, you and your kiddy-sized cadets can join the space team at the test laboratory. Have the engineer tighten the nuts and bolts, and check the infrared camera and drilling function on the Mars rover buggy before you take it for a test drive over the simulated Mars terrain. Help the astronaut test the jetpack and then join the scientist at the computer station to examine the results. It’s all in a day’s work for the LEGO CITY space squad! Bliss…
LEGO® CITY Space Starter Set (ages 5+): £8.99. LEGO.com/CITY

The CITY Space Starter set is cool little outfit, but if you’re after a whole lot more blocks for your buck, check out the CITY Spaceport, worth £69.99. Or better still, try to win yourself this bad boy by clicking here 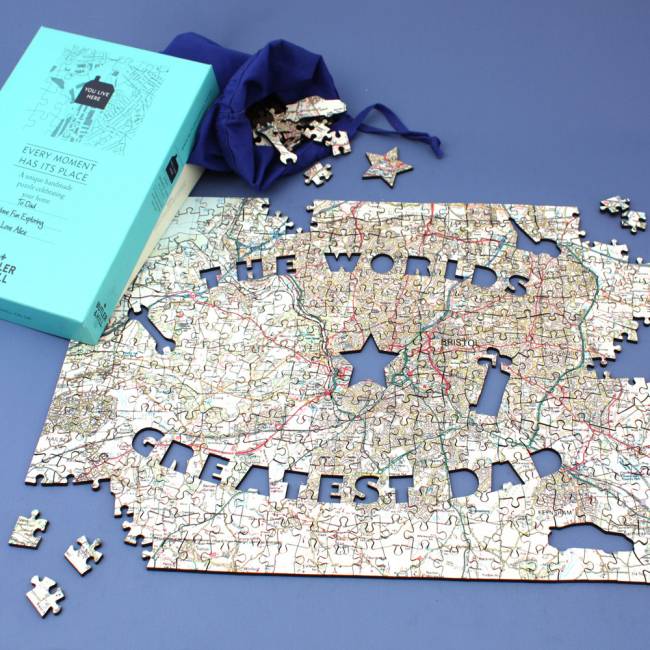 We all know that despite outward appearances – ranging from cringing embarrassment to downright indifference – our kids really do think we’re the greatest. Nevertheless, it’s good to get these things in writing, so you can show it to them when they’re yelling they hate you (teen owners will know all about this). And what better way to get the to spell it out than in a jigsaw that you and the kids can put together… together? This Alljigsaws puzzle includes several specially shaped pieces (known as whimsies), some of which are letters of the alphabet and spell out the message ‘The World’s Greatest Dad’. But there’s more to this jigsaw than just a compliment – send Alljigsaws your postcode and they’ll create a unique puzzle centred on your home – or any place that’s special to you and the kids. It’s also useful for showing older offspring how to get from home to their mates / park / youth club by foot instead of dad’s taxi…
The World’s Greatest Dad Puzzle (ages 7+): £29.99. alljigsawspuzzles.co.uk

Whatever did we do to keep our digits busy before smart phones? Constantly fiddled with the Rubik’s Cube, of course. One of the best things (if not THE best thing) to come out of the 80s, the colourful cube was the most fun you could have while simultaneously turning purple with frustration. With this modern-day Rubik’s Cube, not only will you get to relive those childhood days of twisting and turning (and no doubt chucking across the room), but you can pass on those finely honed skills to your own mini Rubik-masters-in-the-making. And there’s another twist to this particular Rubik’s Cube – it doubles up as a rechargeable night light, so you can play with it under the covers when you’re meant to be fast asleep – just like in the good ol’ days.
Rubik’s Cube Light (ages 8+); £19.99. menkind.co.uk

You know you’re getting old when the beloved games from your youth are classed as ‘retro’. But who cares when they’re as much fun as these five family favourites – all enclosed in cool vintage-style boxes. First up is Blow Football – where you’ll need more puff than Wayne Rooney and more skill than Cristiano Ronaldo, but you’ll have a pitch-load of fun. Next is Snakes And Ladders and Ludo – perfect for knee-high gamers. Get working those brain cells with Tell Me… Quiz – an absorbing family game where the answers change each time you play. Then it’s fingers at the ready with Mousie Mousie and Flying Hats – two action-packed games where you need lightning-fast reactions to make sure you pull your mouse away from the catcher’s cup, and skilled digits to send your flying hats soaring on to the target board. They may be retro, but they’re classics that will have you and the kids forgoing the PS2 in place of some good old-fashioned fun.
Esdevium Games (ages 5+): £5.99 to £8.99. amazon.co.uk