Snow. For some the word brings memories of frozen toes, treacherous roads and cancelled trains. To others, it means WHOOHOO! Especially if you’ve got one of these top toboggans in tow (try to let the kids have at least a couple of runs, eh?)… 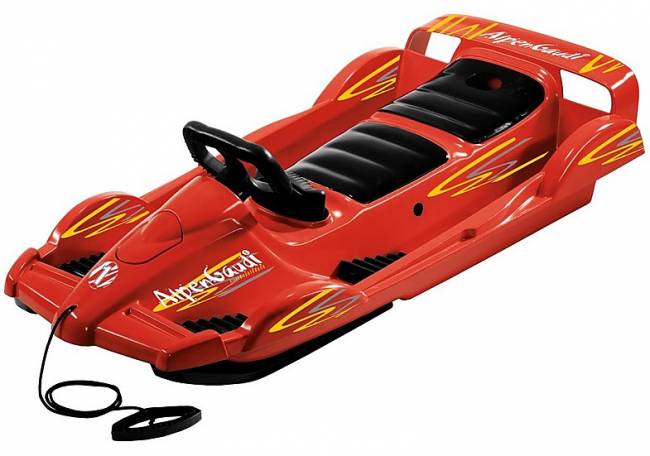 Every kid between five and 15 will have their eyes popping out when they spot this racy red number catapulting down the slopes. Rated numero uno in the Gadget Show’s Top 5 Sledges review, its looks are more than skin deep. The Snow Double Racer Sledge features a robust handbrake with metal claws (brill for last-minute stops) and a sporty three-spoke steering wheel, just made for bone-shaking skids. But the feature we rate above all else is the handy storage compartment for storing winter woollies – or stash of ready-made snowballs. And as the name suggests, this high-tech sledge is designed for two (but if you want to be one of them, you’ll probably have to join the queue of goggled-eyed kids).
Snow Double Racer Sledge, Red (ages 6+): £94.99. halfords.com 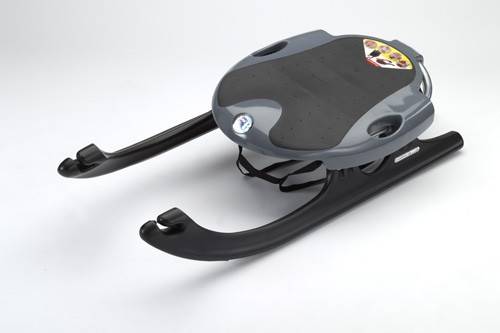 This compact bob sledge has to be the James Bond of the sledging world, making it perfect for ever-discerning (read: impossible to impress) teens, especially as it comes in deadly serious graphite and black. Constructed from a light metal frame, the Champion Deluxe model features stainless-steel runners that ensure a speedy trip down the slopes, while the non-slip seat will help you stay on! Plus, the use of cold-resistant materials will keep nether regions from freezing – always a good thing. And as this sledge folds up, it can be easily back-packed to carry up the hill, ready to go again.
Snow Champion Deluxe, Graphite & Black (ages 8+): £102.99. supertrampdirect.co.uk 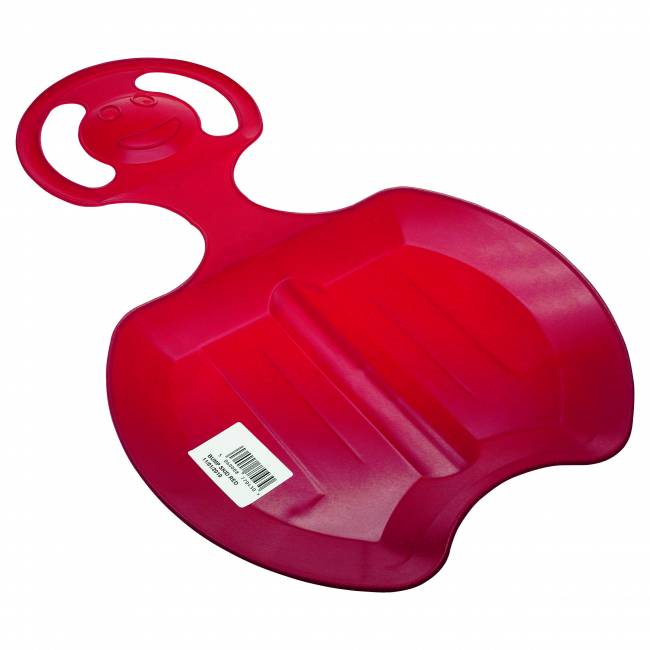 If the machine above is the James Bond of sledges, then the Snow Skimmer (or more affectionally known as the Bum Board) is more your Peppa Pig – not quite so cool, but definitely cheerful – and cheap. Dinky enough to fit in the smallest of car boots and weighing no more than a few hefty snowballs, you can keep the sledge by your side, ready for when the white stuff make an appearance. It’s simple to ride, too – just sit on the board with the handle between your legs and gently lean back and lift your feet. However, there aren’t any hand grips, so until your budding Tombas have got the hang of using themselves to steer the Skimmer, we reckon the Bum Board is better suited to gentle slopes.
Snow Skimmer Bump Sledge (ages 5+): £4.99 and available in red, blue and pink. Tesco.com 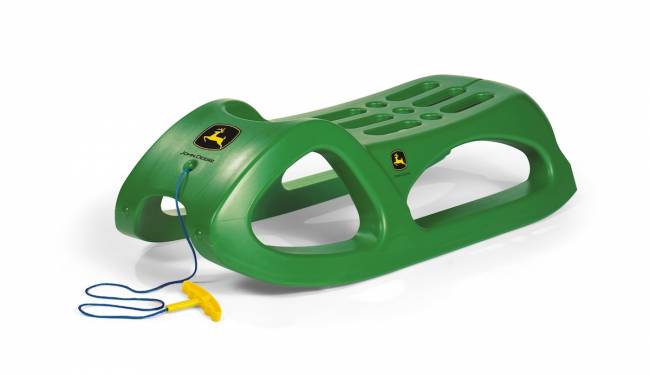 If you grew up in the country, then you’ll probably find something comfortingly familiar about this sledge, as it comes from the maker of the jolly green John Deere tractors. So it’s no surprise that this Snow Cruiser is big and sturdy – it will happily accommodate two big kids or one dad and a little ’un (up to 100kg) on its blow-moulded frame. Tank-like it may be, but thanks to its steel runners, you can toboggan down the slopes – be they covered in icy snow or wet grass – at eye-watering speeds. If you’re not a farmer, but always hankered after a John Deere tractor, here’s your chance to own one. Sort of.
John Deere Snow Cruiser in tractor green (ages 3+): £57.99. argos.co.uk 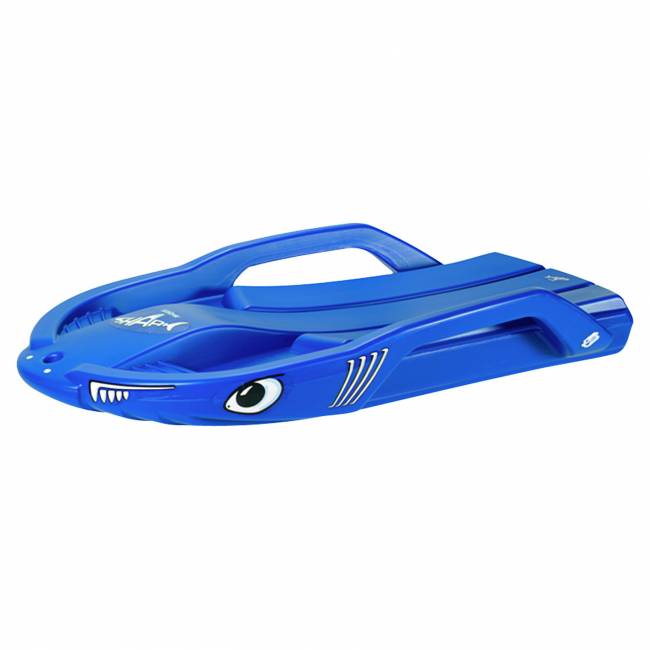 There’s nothing wrong with being the biggest fish on the smallest slopes when you’re riding the Snow Shark. Tough but lightweight and big enough for two kids (albeit of the tiddler size), this sledge features foot recesses and hand grips for extra safety and ease of use – even for beginners. But safety doesn’t mean slow – a contoured under-tray gives this snow cruiser serious zip, ensuring it’s your kids that reach the bottom first (not that you’re a competitive dad or anything). Obviously, the price paid is that you’ll be the one dragging the sledge back up the slope time and time again – but the pull cord will help. And once the snow’s melted, this shark keeps on giving, as it can be used on all that slippery wet grass left behind.
Rolly Snow Shark Sledge (ages 3–5): £55.09. Tesco.com 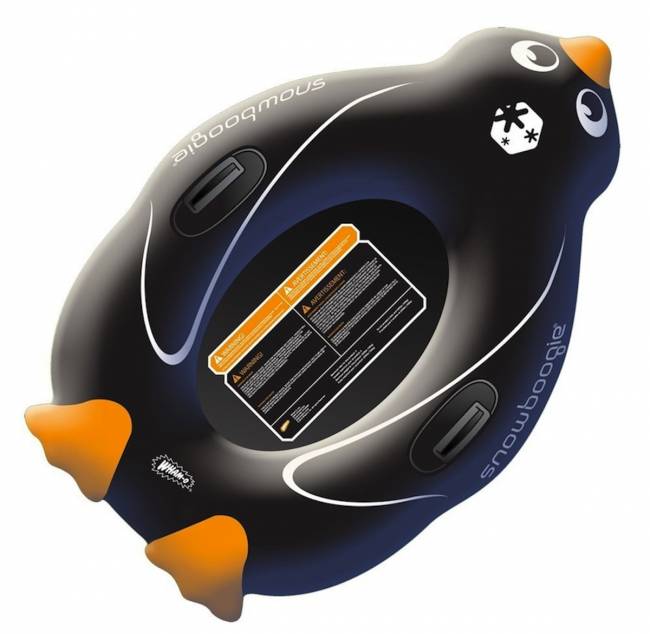 Your high-tech bells and whistles sledges are all well and good, but this inflatable fella is in a league of its own. First up, it’s cute, thus tempting nervous or first-time tobogganers onto the slopes in the first place. Once there, the air-filled sledge provides a comfy cushioned ride with two soft-grip handles for extra security, while the cold-resistant PVC vinyl prevents wee bottoms from turning to buns of ice as they fly down the slopes. Although this sledge is tough, being inflatable, it may get the odd puncture, so the maker has thoughtfully included two patches for a quick fix. And when winter’s finally over, taking the last of the snow with it, the Snow Boogie deflates to a dinky size to be stored away until next Christmas (or blown-up again for pool fun during the summer hols).
Snow Boogie Arctic Penguin Inflatable Sledge (ages 4+): £11.99. splashandrelax.co.uk