Hit The Park With These Great Outdoor Games

This far into the holidays, you could be running out of ideas – and patience – when it comes to keeping the kids entertained, and you wouldn’t be alone. New research from ParkLives – a free activity programme from Coca-Cola Great Britain – has found that: 60% of parents struggle to find an activity the whole family likes doing; nearly half of parents think their kids spend too much time indoors, especially those with older children; and a staggering nine out of 10 parents wish they had the chance to play outdoors with their offspring more. So we’ve hunted down half a dozen great games to tempt your TV-addict youngsters outside for some fun in the sun. From boomerangs to awesome boats, these toys are ready-packed and raring to go at a park near you…

Want your teens to rate you as a dad with his finger on the street-style pulse. Although that’s unlikely in any universe (unless you’re David Beckham), introduce this wicked new game and you may see the slightest nod of begrudging respect. That’s because Wicked UKick, voted Best New Toy at London Toy Fair 2014, is tipped to be the biggest playground craze of the year. Fusing elements of badminton, street football and freestyle, the aim of the game is to keep the UKick in the air for as long as possible using your feet and other parts of your body. Active, interactive fun, which can be played Billy-no-mates style or with a whole park of ultra-cool tweens and teens (and their wicked dads).
Wicked UKick (ages 8+): £7.99. wickedmania.com

Remember the fun you had making paper boats to push with a twig round the local pond? Also remember how they used to sink within seconds or float just out of reach with the slightest whiff of a breeze. What would you have given then – and now – to own this beauty of a boat instead, eh? Playmobil’s Yacht Cruise is the last word in model-boat luxury, featuring a removable top deck that reveals a fully furnished lower deck. The yacht also comes with a functioning anchor winch, silverware, food, luggage, two smug-looking figurines (who wouldn’t be smug?) and other cool extras. A thing of beauty as it is, or you could go all out and upgrade this graceful yacht into a self-propelling mean machine with the RC Underwater Motor. Just try to remember that this is for the kids, not Dad (though you could always try fobbing them off with one of your paper boat efforts…).
Playmobil Luxury Yacht Cruise (ages 4+): £34.99. RC Underwater Motor: £39.99. Playmobil.co.uk

Ahh, what better way to finish off a hard day’s running and shoving at the park than with a few well-charcoaled burgers? Having said that, the park keeper will be after you if you if he gets even a whiff of a sausage. So your best bet is to pack some sarnies and settle down to a round or 10 of the addictive Barbecue Party. The aim of the game is simple – be the first to collect three different food items – but it requires a cool head and steady hand, as that manically smiling red base does not like to be tickled. One false move and BOOOM – the wide-eyed food dudes are spread far and wide. Tragic really. The good news is that once you’ve finished blowing up the hot dogs and your Masterchef has been crowned, all the BBQ bits fit nicely back inside the grill (no washing-up required).
Barbecue Party (ages 4+): £15.30. amazon.co.uk

WIN!
We have three sets of Barbecue Party to be scooped. For your chance to win one, click HERE 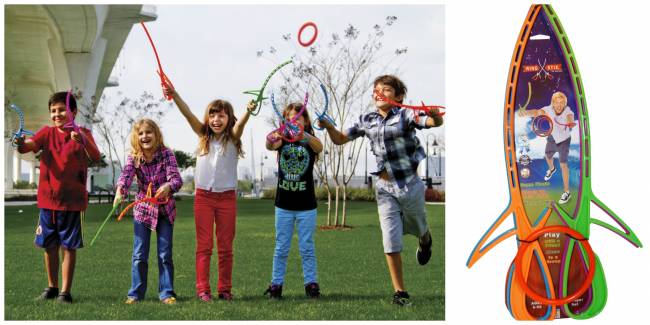 Now this looks proper fun! The aim of Ringstix Lite is simple – use a ‘stix’ to throw and catch the ring. But although easily learned even for thigh-high players, it quickly becomes a game of skill and dexterity, and will have you huffing like a good ’un as you race to catch the ring as it swoops through the sky for up to 27m.  Or, you could take the altogether more relaxing route of passing it around a ring of like-minded players and have a nice wee chat while you’re at it. Either way, this simple, lightweight and colourful game will have you and yours hooked for the rest of the summer.
Ringstix Lite (ages 6+): £8.44. prezzybox.com

Born in the swinging 60s, Twister’s been a hit with double-jointed fun-lovers ever since. So how can you improve on perfection? Make it bigger and tougher so you can play it outside and with even more players. The Get Knotted Garden Game is playable for up to 30 players at a time, thanks to its whopping 300cm by 300cm PVC mat, which comes with lawn pegs to keep it safely in place on the grass during the mayhem. Just like the old-timer Twister, you throw the dice (in this case, two giant inflatable ones) to find out which part of your body you have to twist onto a colour on the play mat. In the process you’ll get royally knotted up with your fellow Knotters, and if you fall head over a–nkle, you’re out. Brilliant bone-twisting fun – just put your chiropractor on speed dial, and away you go!
Get Knotted Garden Game (ages 3+): £41.99. Findmeagift.co.uk

The Sonic Booma is no ordinary boomerang – the makers will have you know that it’s actually the world’s best returning sports boomerang. Indeed, with a flight range of 15-20m and featuring a nifty tri-blade design, the Booma’s very easy to throw and catch, even for budding boomerangers. And you won’t have to worry about it clonking anyone round the ears, as this boomerang whistles as it flies, warning passers-by to DUCK!
Wicked Sonic Booma (ages 8+): £9.99. wickedvision.co.uk

Find some ParkLife near you!

Whether you’re looking for a family-friendly activity like rounders and den building, or fancy something just for you, like some good ol’ ear-tugging rugby, use the postcode finder at parklives.com to find your nearest ParkLives park.