If you can’t face trudging the cold, dark streets with your little monsters come the 31st, treat them to a fright fest in the comfort of their own creepy home instead. Just make sure you’ve sorted the three P’s first: paint, pumpkin and Piñata…

The highlight of any kid’s party has got to be when all the happy, shiny little faces join together in a mob mentality to bash the insides out of some poor defenceless Piñata. And the good news (well, depressing news if you’re a Piñata) is that they’re no longer limited to just birthdays – check out these spook-tacular Halloween-themed Piñatas. Whether you go for the witch, pumpkin, Frankenstein or eye-ball design, your little party guests will have a devilish time beating the living daylights out of it to get to the gruesome goodies inside. All good, clean fiendish fun!
Halloween Piñatas (age 3+): £12.95 / £28.25 (stuffed with creepy chews and ghoulish goodies!). partydelights.co.uk

Get ready to scoop ’em out and carve ’em up. We’re not talking brains (not just yet anyway), but turning a harmless pumpkin into a menacing glow-in-the-dark Jack O’lantern. This Pumpkin Carve ‘N’ Light includes carving saws, scoop, drill, stencil wheel, instructions and 16 pages of easy to follow spooky stencils. So all you need to do is pull on an apron and gloves (so you don’t get covered in pumpkin guts), and get carving. Once your orange fella is gutted and gouged, light him up with the LEG light included in the set (handy touch). The set even comes with some tasty recipes so the poor pumpkin’s insides don’t go to waste.
Pumpkin Carve ‘N’ Light Kit & Stencil Book (ages 12+): £3.99. ebay.co.uk 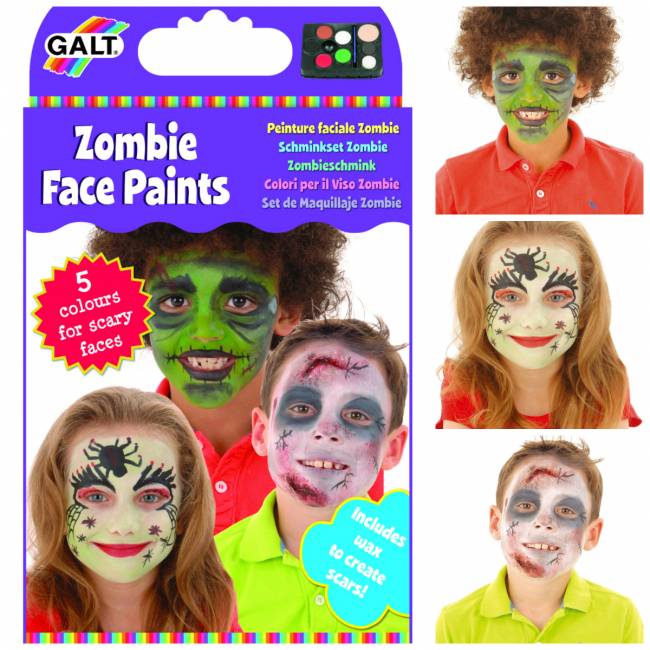 The problem with kids on Halloween is that their cute little faces elicit more of an ‘ahh’ reaction than an ‘aaargh!’. So camouflage those chubby cheeks with some fiendish face paints. Containing everything you need – including five colour face paint discs, brush, sponges etc – this Zombie Face Paints kit will turn your butter-wouldn’t-melt little ’un into a putrid scar-faced ghoul whose favourite tea is boiled brains and soldiers. Read on, if you dare…
Zombie Face Paints (age 5+): £4.99. galttoys.com

No, this one doesn’t start with a ‘P’ but we had to include it, as what better way to kick off Halloween than with boiled brains (or an egg if you’re going to be all squeamish) in a dinky wee Zombie egg cup? This cute and creepy set – complete with brain bowl (egg cup), spade (spoon), lethal limb slashers (weapon-shaped toast cutters), and Emergency Zombie Breakfast Defence instructions – will set your little monsters up for a day of monstrous mayhem nicely.
Zombie Eggpocalypse (age 3+): £6. thegreatgiftcompany.co.uk