With ideal conditions forecast on Sunday April 26, the 35th edition will be compelling viewing…

Sunday’s 35th London Marathon promises to be one of the most fascinating – and quickest – in history, with defending champion and course record-holder Wilson Kipsang lining up in the men’s race aside fellow Kenyan Dennis Kimetto, who last year was the first person to run 26.2 miles in less than two hours and three minutes.

Unsurprisingly it’s being billed as a ‘clash of the champions’ and if the conditions are favourable – mild rather than hot, and not damp – as they are forecast to be for that running window, then more records may tumble.

Kipsang, bronze medallist in the London Olympics three years ago, began his career running with Kenya Police and in 2013 he set the world record marathon record, managing 2:03:23 in Berlin, notoriously the quickest official circuit on the globe.

And last April he broke the London Marathon record with a time of 2:04:29. Having turned 33 in March the Keiyo-born star is two years older than countryman Kimetto, though his legs show little sign of slowing down; indeed, he cruised to glory in the New York marathon in November and has won his last three 42km outings.

The younger Kenyan is a relative late bloomer. Son of a farmer in Eldoret, he came to prominence after winning the half-marathon section of the 2011 Nairobi Marathon. Rather bizarrely, back then he was competing as Dennis Koech, owing to a passport error which also suggested he was a decade younger. A year later – still running as 18-year-old Koech – he defeated Kipsang in his first half marathon away from their homeland, at Ras Al Khaimah on the Persian Gulf.

Kimetto registered 2:02:57 in September’s Berlin Marathon – where else? – to better Kipsang’s world best, though the elder competitor is not likely to roll over and relinquish his London title. He is aiming to become just the fourth man to claim a hat-trick of titles at the event, having succeeded in 2012.

“London always has the best fields but with Dennis in the line-up this year it promises to be a bruising battle,” said Kipsang. “I certainly won’t give up my title belt without a fight, but let’s see who has the knock-out blow. I would love to join the London Marathon legends by winning a third title.”

Kimetto, a pacemaker in the 2013 race, countered: “I broke Wilson’s world record in Berlin last year and now I want his London Marathon crown. I am relishing the chance to face my friend over the famous course. I know it won’t be easy but I an confident I can go the distance whatever he throws at me.”

Apart from Ethiopian Tsegaye Kebede’s two victories in 2010 and three years later, Kenyans have won the men’s London Marathon in every event since 2004. And in 2015 that trend looks set to continue, as Kipsang and Kimetto are joined by Emmanuel Mutai – who finished the Berlin race one second behind the world record last year, making him the next quickest ever on the planet – former world 5,000-metre champion Eliud Kipchoge and Geoffrey Mutai, winner of the World Marathon Majors series in 2012.

Home interest lies with Scott Overall – fifth in the 2011 Berlin Marathon – and Matt Hynes, the two Britons on the elite start line.

In the women’s race it looks likely to be a similar story to that of the men, with Kenyan domination on the cards. Defending her title, reigning double World Champion Edna Kiplagat, 35, lines up with two former London Marathon champions – Priscah Jeptoo (2013) and Mary Keitany (2011 and 2012) – and the fastest half marathon runner in history and namesake, Florence Kiplagat, who was out-sprinted on The Mall last time. 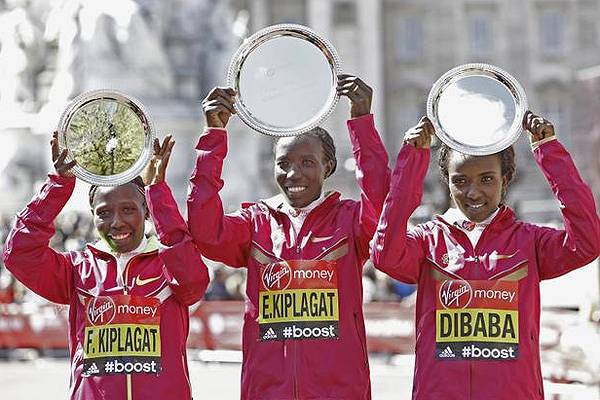 “Now I have tasted success in London, I am determined to win again,” said Edna Kiplagat. “But I know it will be tougher than ever in 2015. Florence will be hungry to win after getting so close last year, and both Priscah and Mary will be doing their best to be number one again.

“We have all had some great races in London in the past and I am sure it will be even better this year.”

Watch The London Marathon on Sunday April 26 from 8.30am on BBC2.