Alcohol Awareness Week: How to Set the Boundaries for Your Kids

We get it. You’re not a normal dad – you’re a cool dad. And cool dads are ok with their kids drinking in moderation, right? As long as they’re at least 16. Or 17? Or 18? And how much is ‘moderation’? And what about YOUR drinking? You’re definitely setting a healthy example… right?! To mark this year’s Alcohol Awareness Week , DAD.info has teamed up with Alcohol Concern to bring you some helpful guidelines for setting some drinking boundaries with your kids…

If parenting is a minefield, parenting + alcohol = a bit of a nightmare. That’s why Alcohol Research UK has plenty of useful advice – based on evidence – on what you can do to help your kids to develop a healthy relationship with alcohol.

First up – the law. It’s illegal to give any child under five alcohol. Children under 16 are usually allowed in licensed premises with an adult (though a pub might make its own rules), but they can’t have any alcoholic drinks. It’s illegal to buy alcohol for anyone under 18 to drink in a pub or any other public place. The only exception is that young people aged 16 or 17 can drink beer, wine or cider bought by an accompanying adult to drink with a meal.

But that’s only a tiny part of the picture. Even though you can legally give your child over the age of five alcohol at home – should you?

The Chief Medical Officers (that is, the top medical authorities in England and Wales) recommend that children shouldn’t drink alcohol until the age of 15 at the very earliest. That’s because children younger than 15 are particularly vulnerable to the effects of alcohol, and if they drink at this age are more at risk of developing alcohol-related problems when they’re older. But there are risks for older teenagers too – parts of their brain are still growing (that’s why they sleep so much) and drinking alcohol could affect their learning skills and long-term memory.

Some parents, though, reckon that it’s important to provide small amounts of alcohol before their child hits 18 to help them to learn to drink sensibly. A UK survey in 2009 of over 2,000 parents found most were happy for children to have a weak or watered down drink from the age of 14, and a full-strength drink from the age of 16. That makes sense – but unfortunately there’s no strong evidence that it works.

At this point you may be feeling a bit hopeless. Alcohol marketing and peer pressure are strong forces pushing teenagers to want to experiment with alcohol, and as a parent that can feel overwhelming. But the good news is that evidence shows that parents have a strong influence over their children’s drinking, even for older teenagers.

The three most important things are your rules, your relationship, and your own drinking.

As most dads (even cool dads) will know, rules come first. There’s strong evidence to show that an authoritative parenting style – setting clear boundaries for behaviour – is linked to a lower risk of harmful drinking among teenagers. But it’s important that you’re open about why those boundaries exist, and the difficulties sticking to them. It might help to get together with the parents of your children’s friends and agree boundaries together.

Another parenting style that’s linked to teens drinking less is parental monitoring. Don’t bust out the Phone Tracker just yet – this simply means knowing where your children are, what sort of thing they get up to and who their friends are. All of this leads on from having an open, honest relationship.

Finally – and this might be the hard one, Dads – your own drinking. Teenagers’ attitudes to drinking are based in part on their ideas about how others use alcohol, and are often modelled on their parents’ behaviour. As you’ll know, they are the first to spot the difference between what parents say and do.

Do you get drunk around your kids sometimes? Or if you don’t get drunk, do you drink regularly? Studies show that if parents do either of these things, there’s an increased risk that their children will go on to adopt risky drinking behaviours themselves. What you say about your drinking is also important; saying, “I need a drink,” or referring to drinking as a way to reduce stress might not send the messages you want your kids to pick up. That doesn’t mean that you have to be tee-total – but if you are worried about your drinking, contact your GP for confidential advice.

Parents – you’re important. Wider influences like advertising, peer pressure and the desire to experiment will of course play a role in your children’s drinking, and you can’t be there 24/7. But you can play a crucial role in developing their knowledge, skills and resilience around alcohol. 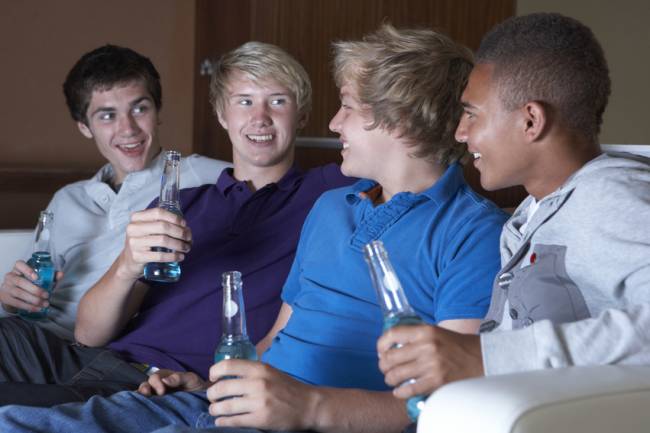 1. Try to ensure that your children maintain an alcohol-free childhood, at the very least up to the age of 15.

2. Discuss with your children the pleasures and dangers associated with drinking, and be honest about your own drinking – children can spot hypocrisy a mile off.

3. Set consistent rules around drinking. Talking to the parents of your children’s friends and agreeing boundaries together might help.

4. Be aware of your own drinking – is binge drinking or appearing drunk in front of your children, or even drinking to reduce stress, setting an example that you want them to follow?

5. Lock up your booze! OK, maybe don’t go that far – but if you keep alcohol in the home, be aware of how accessible it is to your children.

Al-Anon family groups provide support to anyone whose life is, or has been, affected by someone else’s drinking, regardless of whether that person is still drinking or not. Visit al-anonuk.org.uk

For more advice and helpful fact sheets on alcohol and families, visit alcoholconcern.org.uk