DAD.info | DAD BLOGS: Ollie | Mind Your Language: The Cringe-Inducing Consequences of Swearing in Front of the Kids 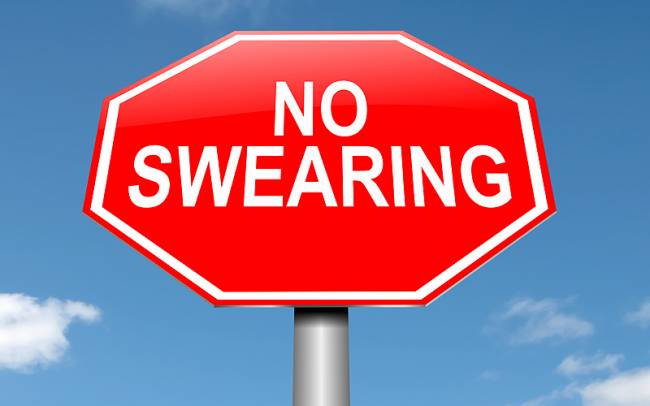 Sometimes naughty words instinctively sneak out from the lips of parents, but if they do so in front of little ones be prepared to face the cringe-inducing consequences

If your child is anything like mine, they will enter peak-parrot mode at about the age of 20 months. During this period – which can last some months – it is especially important to be careful about what you say, lest it be repeated by the little one at the most embarrassing moment possible.

As dutiful parents we have attempted to eliminate all profanities since we welcomed a new visitor in the house – at least within his earshot. Yet sometimes, tsk, the naughty words inevitably sneak out, and increasingly face the possibility of being echoed.

I’d like to think I seldom swear, and only a) in moments of great stress, b) in moments of acute pain, c) while telling a rude joke, d) when drunk (and likely telling a joke). Oh, and watching Manchester City lose / concede a goal (see blogs passim).

The other week I returned from a stag do in the Highlands, when I was able to complete my monthly swearing quota while carousing with pals and cursing the damn midges. When I arrived home on the Sunday evening it was bath time for our parrot, and he was gleeful about Daddy’s return.

Under Freddie’s instruction I gamely stripped off and lowered myself into the water alongside him – I thought it might soothe the 150+ bites I’d managed to accumulate while trekking in the Cairngorms National Park and also while partaking in a spot of ‘naked fire-ball hockey’ (one for another column, possibly on another website).

After three days away, he was so delighted to see me, and we splashed each other, laughing heartily. Suddenly, as I lay with my back on the bottom of the bath and my son straddled me, he shouted ‘cuddle’ and jumped up to hug me. In his excitement Freddie contrived to dive sideways, missing my neck with his arms and crashing the side of his head on to the corner of the bath. Ouch.

Immediately a stream of blood began gushing from above his left eye. As someone who has played a lot of rugby as a backrow forward and has a rash of such scars on my face to prove it, I knew we needed to take our parrot to hospital to have the wound stitched up, no passing go.

It was at this point, with the sight of my son’s unstemmed blood flow curdling in my mind with the prospect of four hours in the local accident-and-emergency waiting room, I instinctively elicited a four-letter swear word beginning with the letter S.

Freddie looked at me quizzically, having never before heard the profanity, and played it back to me a couple of times, loudly, with near perfect pronunciation and articulation. I swore again, but silently this time.

When we reached A&E Freddie was asked by the triage nurse to explain what had happened to cause his injury. It went something like this: “Daddy, Scotland, bath, eye, s***.”

As my parrot grinned, the medic scanned me suspiciously. I swore silently, once more.